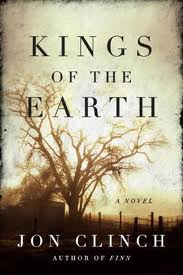 It's as close as a primitive farm on the margins of an upstate New York town, where the three Proctor brothers live together in a kind of crumbling stasis. They linger like creatures from an older, wilder, and far less, forgiving world--until one of them dies in his sleep and the other two are suspected of murder.
Told in a chorus of voices that span a generation, Kings of the Earth examines the bonds of family and blood, faith and suspicion, that link not just the brothers but their entire community.
Vernon, the oldest of the Proctors, is reduced by work and illness to a shambling shadow of himself. Feeble-minded Audie lingers by his side, needy and unknowable. And Creed, the youngest of the three and the only one to have seen anything of the world (courtesy of the U.S. Army), struggles with impulses and accusations beyond his understanding. We also meet Del Graham, a state trooper torn between his urge to understand the brothers and his desire for justice; Preston Hatch, a kindhearted and resourceful neighbor who's spent his life protecting the three men from themselves; the brother's only sister, Donna, who managed to cut herself loose from the family but is then drawn back; and a host of other living, breathing characters whose voices emerge to shape this deeply intimate saga of the human condition at its limits.

ALSO.........
Beyond The Grave: 39 Clues, by Jude Watson
Black Circle, by Patrick Carman
Call Me Mrs. Miracle, by Debbie Macomber
The Confession, by John Grisham
Dog Days: Diary of a Wimpy Kid, by Jeff Kinney
Don't Blink, by James Patterson
Everything, by Kevin Canty
Fall Of Giants, by Ken Follett
The Fort, by Bernard Cornwell
Galveston, by Nic Pizzolatto
House On Salt Hay Road, by Carin Clevidence
In The Company Of Others, by Jan Karon
In Too Deep: 39 Clues, by Jude Watson
The Last Straw: Diary Of A Wimpy Kid, by Jeff Kinney
Mini Shopaholic, by Sophie Kinsella
Naked Heat, by Richard Castle
Painted Ladies, by Robert B. Parker
Playing The Game, by Barbara Taylor Bradford
The Reversal, by Michael Connelly
A Scattered Life, by Karen McQuestion
Still Life, by Louise Penny
What Is Left The Daughter, by Howard Norman
Worth Dying For, by Lee Child
Posted by Library at 4:13 PM