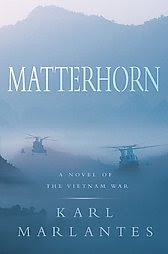 High in the mountains of of South Vietnam, a young lieutenant is flown to an isolated, anonymous hill between Laos and the DMZ where a company of Marines is building a fire-support base. It is his first day in the jungle. From the moment his feet hit the mud-the brass have named the hill Matterhorn-his senses are assaulted by a chaotic swirl of monsoon rain and fog, screeching radios and bulldozers, and the stench of almost two hundred  men who are some combination of sick, exhausted, filthy, sodden, and scared out of their minds. He has no idea if he is up to this.
So begins the extraordinary story of second lieutenant Waino Mellas and his comrades in Bravo Company. The year is 1969 and Mellas, a reservist with an Ivy League education and a chip on his shoulder, has been assigned to lead a rifle platoon of forty Marines, most of whom are teenagers. He will need the help of his fellow officers: Fitch, the harried company commander who, at twenty-three, is already straining under the weight of his responsibilities; Hawke, the charismatic executive officer who is suspicious of Mellas's ambition; and Mellas's fellow platoon leaders, Goodwin and Kendall, who have troubles of their own.
Soon the company id ordered to abandon Matterhorn and embark on a dangerous mission to sever a crucial North Vietnamese supply line. As the Marines navigate the bewildering valleys and switchbacks of the jungle they endure a series of deadly tests-firefights, mortar attacks, snipers-and are driven forward by a capricious colonel who, thanks to a new technology, is trying to fight the war by long-range radio. They are also dogged by racial tension that threatens to tear the company apart. But when the Marines find themselves confronted by a massive enemy regiment, they are thrust into the raw and all-consuming terror of combat. As each man fights for his life and the lives of his friends, Mellas must face the reality of the war, the truth of his motives, and the depth of his commitments. the experience will change him forever.

Don't forget these.................
Angel Lane, by Sheila Roberts
The Bone Thief, by Jefferson Bass
Breaking Out of Bedlam, by Leslie Larson
Caught, by Harlan Coben
Cross Gardener, by Jason Wright
Dancing for Degas, by Kathryn Wagner
Fools Rush In, by Janice Thompson
Hannah's List, by Debbie Macomber
Her Mother's Hope, by Francine Rivers
The Holdout in the Diablos, by Louis Trimble
Home Cooking with Trisha Yearwood, by Trisha Yearwood
Labor Day, by Joyce Maynard
Lonely, by Emily White
Love in Bloom, by Sheila Roberts
Major Pettigrews Last Stand, by Helen Simonson
9th Judgment, by James Patterson
Not Without Hope, by Nick Schuyler
One Good Dog, by Susan Wilson
Paper Roses, by Amanda Cabot
The Returning, by Ann Tatlock
Savor the Moment, by Nora Roberts
Secret Daughter, by Shilpi Somaya Gowda
Shades of Blue, by Karen Kingsbury
Shadow of Your Smile, by Mary Higgins Clark
A Single Thread, by Marie Bostwick
Swinging on a Star, by Janice Thompson
Tale of Halcyon Crane, by Wendy Webb
The Three Weissmanns of Westport, by Cathleen Schine
A Thread So Thin, by Marie Bostwick
A Thread of Truth, by Marie Bostwick
The Weed that Strings the Hangman's Bag, by Alan Bradley
Whiter Than Snow, by Sandra Dallas
Women, Food, and God, by Geneen Roth