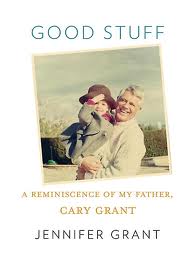 Jennifer Grant is the only ﻿child of Cary Grant, who was, and continues to be, the epitome of all that is elegant, sophisticated, and deft. Almost half a century after Cary Grant's retirement from the screen, he remains the quintessential romantic comic movie star. He stopped making movies when his daughter was born so that he could be with her and raise her, which is just what he did.
Good Stuff is an enchanting portrait of a profound and loving relationship between a daughter and her father, who just happens to be one of America's most iconic male movie stars.
Cary Grant's own personal childhood archives were burned in World War I, and he took painstaking care to ensure that his daughter would have an accurate record of her early life. In Good Stuff, Jennifer Grant writes of their life together through her high school and college years until Grant's death at the age of eighty-two.
Cary Grant had a happy way of living, and he gave that to his daughter. He invented the phrase "good stuff" to mean happiness. For the last twenty years of his life, his daughter experienced the full vital passion of her father's heart, and she now -- delightfully-- gives us a taste of it.
She writes of the lessons he taught her; of his childhood as well as her own...Here are the letters, notes, and funny cards written from her to him...as well as bits of conversation between them (Cary Grant kept a tape recorder going for most of their time together).
She writes of their life at 9966 Beverly Grove Drive, living in a farmhouse in the midst of Beverly hills, playing, laughing, dining, and dancing through the thick and thin of Jennifer's growing up; the years of his work, his travels, his friendships with "old Hollywood royalty" (the Sinatras, the Pecks, the Poitiers, et. al.) and with just plain-old royalty (the Rainiers)...
We see Grant the playful dad; Grant the clown, sharing his gifts of laughter through his warm spirit; Grant teaching his daughter about life, about love, about boys, about manners and money, about acting and living.
Cary Grant was given the undefinable incandescence of charm. He was a pip....
Berried to the Hilt, by Karen MacInerney
﻿The Brides House, by Sandra Dallas
DK Children's Illustrated Dictionary, by DK
DK First Nature Encyclopedia, by DK
DK First Science Encyclopedia, by DK
Dead Reckoning, by Charlaine Harris
Deep Down True, by Juliette Fay
Georgia's Kitchen, by Jenny Nelson
How To Bake a Perfect Life, by Barbara O'Neal
Jeannie Out of The Bottle, by Barbara Eden
Land of the Painted Caves, by Jean Auel
Love Goddess Cooking School, by Melissa Senate
Miles To Go, by Richard Paul Evans
Mine Is The Night, by Liz Curtis Higgs
Name of the Wind, by Michael Rothfuss
One Was a Soldier, by Julia Spencer-Fleming
One Thousand Gifts, by Ann Voskamp
Out Live Your Life, by Max Lucado
Please Look After Mom, by Kyung-Sook Shin
The Reluctant Entertainer, by Sandy Coughlin
The School of Essential Ingredients, by Erica Bauermeister
Skipping a Beat, by Sarah Pekkanen
Some Assembly Required, by Lynn Kiele Bonasia
Southern Plate, by Christy Jordan
Summer Shift, by Lynn Kiele Bonasia
A Thousand Cuts, by Simon Lelic
A Wise Man's Fear, by Patrick Rothfuss
Posted by Library at 2:25 PM No comments: 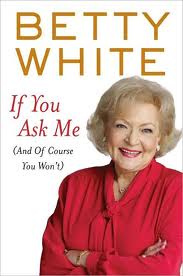 Seven-time Emmy winner﻿ Betty White's wit and wisdom take center stage as she tackles topics like friendship, romantic love, aging, television, fans, love for animals, and the brave new world of celebrity. Drawing from from a lifetime of lessons learned, If You Ask Me mixes her thoughtful observations with humorous stories from a seven-decade career in Hollywood. Longtime fans and new fans alike will relish Betty's candid take on everything from the unglamorous reality behind red carpet affairs, to her beauty regimen ("I have no idea what color my hair is, and I never intend to find out"), to the Facebook campaign that helped persuade her to host Saturday Night Live despite having turned down the hosting job three times over the course of her career. 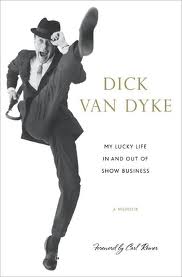 Dick Van Dyke, indisputedly one of the greats of the golden age of television, is admired and beloved by audiences the world over for his beaming smile, his physical dexterity, his impeccable comic timing, his ridiculous stunts, and his unforgettable screen roles.
His trailblazing television program, The Dick Van Dyke Show was one of the popular sitcoms of the 1960's and introduced another majoe television star, Mary Tyler Moore. But Dick Van Dyke was also an enormously engaging movie star whose films, including Mary Poppins and Chitty Chitty Bang Bang, have been discovered by a new generation of fans and are as beloved today as they were when they first appeared. Who doesn't know the word
supercalifragilisticexpialidocious?
A colorful, loving, richly detailed look at the decades of a multilayered life, My Lucky Life In and Out of Show Business will enthrall every generation of reader, from baby boomers who recall when Rob Petrie became a household name, to all those still enchanted by Bert's "Chim Chim Cher-ee." This is a lively, heartwarming memoir of a performer who still thinks of himself as a "simple song-and-dance man," but who is, in every sense of the word, a classic entertainer.
.................
Bookmarked for Death, by Lorna Barrett
Brothers of Baker Street, by Michael Robertson
Classifies as Murder, by Miranda James
Color of Your Skin, by Michael R. Phillips
A Day to Pick Your Own Cotton, by Michael R. Phillips
﻿Eve, by Iris Johansen
The Judgment, by Beverly Lewis
Leaving, by Karen Kingsbury
Miss Julis Hits the Road, by Ann B. Ross
Perfect Blend, by Trish Perry
The Reading Promise, by Alice Ozma
Sarah's Gift, by Marta Perry
Spackled and Spooked, by Jennie Bentley
Surrender the Heart, by M. L. Tyndall
Surrender the Night, by M. L. Tyndall
Tea for Two, by Trish Perry
10th Anniversary, by James Patterson
The Thorn, by Beverly Lewis
Together Is All We Need, by Michael R. Phillips
Tomorrow's Garden, by Amanda Cabot
A Turn in the Road, by Debbie Macomber
West of Here, by Jonathan Evison
Posted by Library at 11:25 AM No comments: 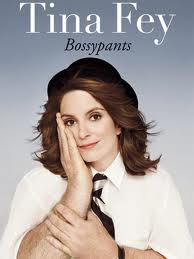 Before Liz Lemon, before "Weekend Update," before "Sarah Palin," Tina Fey was just a young girl with a dream: recurring stress dream that she was being chased through a local airport by her middle-school gym teacher. She also had a dream that one day she would become a comedian on TV.
She has seen both these dreams come true.
At last, Tina Fey's story can be told. From her youthful days as a vicious nerd to her tour of duty on Saturday Night Live; from her passionately halfhearted pursuit of physical beauty to her life as a mother eating things off the floor; from her one-sided college romance to her nearly fatal honeymoon--from the beginning of this paragraph to this final sentence.
Tina Fey reveals all, and proves what we've all suspected: you're no one until someone calls you bossy. 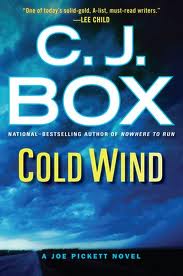 When Earl Alden is found dead, dangling from a wind turbine, it's his wife, Missy, who is arrested. Unfortunately for Joe Pickett, Missy is his mother-in-law, a woman he dislikes heartily (and vice versa), and now he doesn't know what to do--especially when the early signs point to her being guilty as sin.
But then things happen to make Joe wonder: Is Earl's death what it appears to be? Is Missy being set up? He has the county attorney and sheriff on one side, his wife on the other, his estranged frienf Nate on a lethal mission of his own, and some powerful interests breathing down his neck.
Whichever way this goes...it's not going to be good.
At Home on Ladybug Farm, by Donna Ball
Bottom of the 33rd, by Dan Barry
Chasing Fire, by Nora Roberts
Delirious, by Daniel Palmer
Eve, by Iris Johansen
Fatal Fixer Upper, by Jennie Bentley
Fifty-Six Joe DiMaggio, by Kostya Kennedy
The Goodbye Quilt, by Susan Wiggs
I'll Walk Alone, by Mary Higgins Clark
Learning to Swim, by Sara J. Henry
Love Letters from Ladybug Farm, by Donna Ball
Love You More, by Lisa Gardner
Miss Julia Delivers the Goods, by Ann B. Ross
Money and Power, by William D. Cohan
Murder is Binding, by Lorna Barrett
Murder Past Due, by Miranda James
On What Grounds, by Cleo Coyle
Silver Boat, by Luanne Rice
Started Early Took My Dog, by Kate Atkinson
This Life Is In Your Hands, by Melissa Coleman
Through the Grinder, by Cleo Coyle
Two Kisses for Maddy, by Matthew Logelin
A Year on Ladybug Farm, by Donna Ball
Posted by Library at 10:02 AM No comments:

Reading in the Round