Twenty years ago John Costello's life, as he knew it, ended.
He and his beautiful girlfriend Nadia became victims of a deranged "Hammer of God" killer who terrorized Jersey City throughout the summer of 1984.This murderer went after young courting couples in an attempt to "save their souls."
Nadia was killed by the first blow of the hammer. John survived, but was physically and psychologically scarred to an extent that few people could comprehend. He withdrew from society, hid in his apartment and now only emerges to work as a crime researcher for a major newspaper. Damaged he may be, no one in New Jersey knows more about serial killers than John Costello.
So, when a new spate of murders starts-- all seemingly random and unrelated-- John is the only one who can discern the complex pattern that lies behind them. But could this dark knowledge be about to threaten his life? 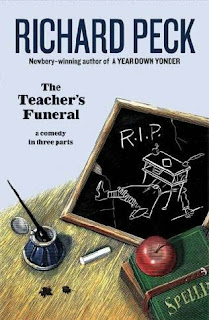 School is the only thing standing between fifteen-year-old Russell Culver and his dream. Now that his teacher's hauled off and died, maybe Hominy Ridge School will be shut down for good and he can light out for the endless skies of the Dakotas to join a team of harvesters working the new 1904 all-steel threshing machines.
No such luck.
Russell and his schoolmates are about to be ruled by a new teacher who is Russell's worst nightmare. Of course, no teacher is a match for Russell, Pearl, Flopears, Little Britches--the whole bunch. They're going to do whatever it takes to sink the school, even if it means stealing supplies, rustic vandalism, a blazing boys' privy, and more snakes than you can shake a stick at.
Also.........
Antsy Does Time, by Neal Shusterman
Born To Run, by Christopher McDougall
Blind Descent, by James M. Tabor
Change Your Brain, by Daniel G. Amen
Drive, by Daniel H. Pink
Every Last One, by Anna Quindlen
Frindle, by Andrew Clements
Have A Little Faith, by Mitch Albom
Homefront, by Doris Gwaltney
Last Stand, by Nathaniel Philbrick
Lemonade War, by Jacqueline Davies
Lost and Found, by Andrew Clements
Million Dollar Throw, by Mike Lupica
No Talking, by Andrew Clements
North of Beautiful, by Justina Chen Headley
Operation Mincemeat, by Ben MacIntyre
Out Of My Mind, by Sharon Draper
The Particular Sadness of Lemon Cake, by Aimee Bender
Private, by James Patterson
Reaching for the Sun, by Tracie Zimmer
Rikki Tikki Tavi, by Rudyard Kipling
The School Story, by Andrew Clements
The Schwa Was Here, by Neal Shusterman
The Secret School, by Avi
The Sleeping Beauty, by Mercedes Lackey
Splendor, by Anna Godbersen
Springs Renewal, by Shelley Shepard Gray
Sworn to Silence, by Linda Castillo
Things Hoped For, by Andrew Clements
Things Not Seen, by Andrew Clements
War, by Sebastian Junger
Winters Awakening, by Shelley Shepard Gray

Posted by Library at 5:14 PM No comments:

Come to Red River County Public Library and board the
"Reading Express"
Sign-up begins the first day of the program, June 14th - July16th!
Read, translation-travel, at your own pace and chug along the railroad tracks to such destinations as Jungle Junction, Seaside Station, and Destination Depot! Collect your prizes and collect your tickets for the Depot giftshop that will open up to reading program participants on party day: July16th.
Posted by Library at 3:19 PM No comments: