The Junior Book Feature is Brisingr: 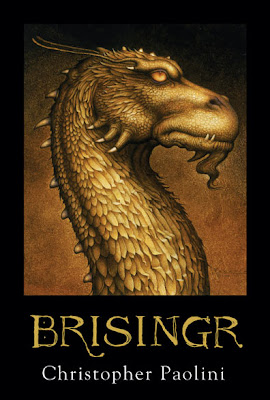 It's been only months since Eragon first uttered "brisingr," an ancient language term for fire. Since then, he's not only learned to create magic with words--he's been challenged to his very core. Following the colossal battle against the Empire's warriors on the Burning Plains, Eragon and his dragon, Saphira, have narrowly escaped with their lives. Still, there is more adventure at hand for the Rider and his dragon, as Eragon finds himself bound by a tangle of promises he may not be able to keep.

First is Eragon's oath to his cousin, Roran: to help rescue Roran's beloved from King Galbatorix's clutches. But Eragon owes his loyalty to others, too. The Varden are in desperate need of his talents and strengths--as are the elves and dwarves. When unrest claims the rebels and danger strikes from every corner, Eragon must make choices--choices that will take him across the Empire and beyond, choices that may lead to unimagined sacrifice.
Eragon is the greatest hope to rid the land of tyranny. Can this once simple farm boy unite the rebel forces and defeat the king?


The Featured Novel:
The Laughter of Dead Kings

Who stole one of Egypt's most priceless treasures? That is the
question that haunts the authorities after a distinguished British
gentleman with an uppercrust accent cons his way past a security guard and escapes into the desert carrying a world-famous, one-of-a-kind historic relic. But the Egyptian authorities and Interpol believe they know the identity of the culprit. The brazen cri 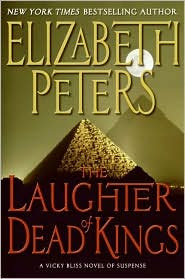 me bears all the earmarks of the work of one "Sir John Smythe," the suave and dangerously charming international art thief who is, in fact, John Tregarth, the longtime significant other of Vicky Bliss. But John swears he is retired--not to mention innocent--and he vows to clear his name by hunting down the true criminal.
Vicky's faith in her man's integrity leaves her no choice but to take a hiatus from her position at a leading Munich museum and set out for the Middle East. Vicky's employer, the eminent Herr Doktor Anton Z. Schmidt, rotund gourmand and insatiable adventurer, decides to join the entourage.

But dark days and myriad dangers await them in this land of intriguing antiquity. Each uncovered clue seems to raise even more questions for the intrepid Vicky--the most troubling being, Where is John going during his increasingly frequent and unexplained absences? And the stakes are elevated considerably when a ransom note arrives accompanied by a grisly momento intended to speed up negotiations--because now it appears that murder most foul has been added to the equation.

The Feature Non-Fiction Book: The Necklace

Four years ago, in Ventura, California, Jonell McLain saw a diamond necklace in a local jewelry store dislpay window. The necklace aroused desire first, then provocative questions: Why are personal luxuries so plentiful yet accessible to so few? What if we shared what we desired? Several weeks, dozens of phone calls, and a leap of faith later, Jonell bought the necklace with twelve other women, with the goal of sharing it.

Part charm, part metaphor, part mirror, the necklace weaves in and out of each woman's life, reflecting her past, defining her present, and making promises for her future. Lending sparkle in surprising and unexpected ways, the necklace comes to mean something dramatically different to each of the thirteen women.
With vastly dissimilarhistories and lives, the women show us how they transcended their individual personalities and politics to join together in an uncommon journey. What started as a quirky social experiment became something far richer and deeper, as the women trandformed a symbol of exclusivity into a symbol of inclusiveness. They discovered that sharing the necklace among themselves was only the beginning: The more they shared with others, the more profounf this experience--and experiment--became.

Posted by Library at 1:30 PM No comments: 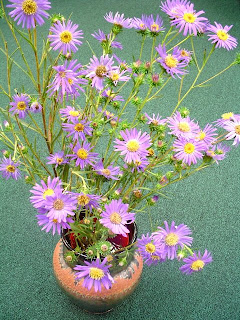 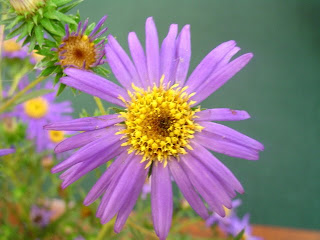 The purple and gold blooms of the Meadow Aster brings a vivid yet subtle note to our late summer-early fall landscape.

The stiffly upright, slender, hairy periennial grows to 20 to 32 inches high from a woody base.

Posted by Library at 2:38 PM No comments: