Do you find the list of new books useful?
Have read any from the lists?
Have you read any of the featured books?
Tell us about it! Leave us your feedback in the comment field below.

Fact and fiction blend in this historical novel that chronicles the relationship between architect Frank Lloyd Wright and Mamah Cheney, from their meeting in Oak Park, Illinois, when they were each married to another to the clandestine affair that shocked Chicago society.

Peony in Love, by Lisa See

Twenty years after a shared childhood marked by their considerable popularity, Tracy, Olivia, and Holly reunite on a luxury Caribbean cruise during which a chance mistake triggers a series of devastating events that puts their survival in jeopardy.

In 17th century China, three women become emotionally involved with The Peony Pavilion, a famed opera rumored to cause lovesickness and even death, one of which succumbs to its spell only to return after her death to haunt her former fiancé who has married another.

Non-fiction:
Cure for Anything is Salt Water, by Mary South
Family Driven Faith, by V. Baucham
Geography of Home, by Akiko Busch
Guiness Book of World Records 2008
Here if You Need Me, by Kate Braestrup
Hunting the American Terrorist, by Terry Turchie
Measure of All Things: Story of Man & Measurement
Music Lovers Poetry Anthology
Nine Ways to Cross a River, by Akiko Busch
One Red Paperclip, by Kyle MacDonald
Perfect Figures: the Lore of Numbers
Sentinel of the Seas: Life & Death at the Most Dangerous Lighthouse Ever Built
What Your Childhood Memories Say About You, by Kevin Leman
3:16, The Numbers of Hope, by Max Lucado
4:8 Principle, by Tommy Newberry

Inspirational:
Chasing Fireflies, by Charles Martin
Coral Moon, by Brandilyn Collins
In Every Flower, by Patti Hill
In Search of Eden, by Linda Nichols
It Happens Every Spring, by Gary Chapman
A Place Called Home, by Lori Wick
A Promise for Ellie, by Lauraine Snelling
Prophet, by Francine Rivers
Scribe, by Francine Rivers
Sophia’s Dilema, by Lauraine Snelling
Summer Breeze, by Catherine PalmerA Thousand Tomorrows, by Karen Kingsbury
Posted by Library at 2:33 PM No comments:

When the Clarksville High School Class of 1957 celebrated their 50th Anniversary this summer, they made a donation to the library in memory of the deceased members of the class. A beautiful coffeetable book, Historic Courthouses of Texas, has been placed in their honor.
The book gives details of 100 courthouses across Texas, highlighting their origin, craftmanship and character, as well as stories behind their construction. The photography is spectacular, the images are large, bright and detailed. Red River County is represented on four beautiful pages. The next time you are in the library, browse through this magnificent book. You will not be disappointed. 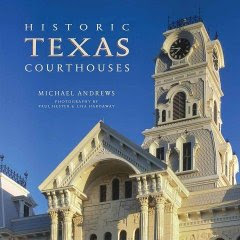 Posted by Library at 4:41 PM No comments:

On a clear night in late June 2005, four U.S. Navy SEALs left their base in northern Afghanistan for the mountainous Pakistani border. Their mission was to capture or kill a notorious al Qaeda leader known to be ensconced in a Taliban stronghold surrounded by a small but heavily armed force. Less then twenty-four hours later, only one of those Navy SEALs remained alive. This is the story of fire team leader Marcus Luttrell, the sole survivor of Operation Redwing, and the desperate battle in the mountains that led, ultimately, to the largest loss of life in Navy SEAL history. But it is also, more than anything, the story of his teammates, who fought ferociously beside him until he was the last one left-blasted unconscious by a rocket grenade, blown over a cliff, but still armed and still breathing. Over the next four days, badly injured and presumed dead, Luttrell fought off six al Qaeda assassins who were sent to finish him, then crawled for seven miles through the mountains before he was taken in by a Pashtun tribe, who risked everything to protect him from the encircling Taliban killers.A six-foot-five-inch Texan, Leading Petty Officer Luttrell takes us, blow-by-blow, through the brutal training of America's warrior elite and the relentless rites of passage required by the Navy SEALs. He transports us to a monstrous battle fought in the desolate peaks of Afghanistan, where the beleaguered American team plummeted headlong a thousand feet down a mountain as they fought back through flying shale and rocks. In this rich , moving chronicle of courage, honor, and patriotism, Marcus Luttrell delivers one of the most powerful narratives ever written about modern warfare-and a tribute to his teammates, who made the ultimate sacrifice for their country. --Amazon.com

Posted by Library at 3:58 PM No comments:

At number ten on this week’s New York Times Bestseller list, Thursday Next: First Among Sequels, by Jasper Fforde sounded like the kind of book our readers would enjoy. The only problem is that it is fifth in a series. The only solution to that is to backtrack and start at the beginning. First came The Eyre Affair, followed by Lost in a Good Book, both of which are currently only available in paperback. 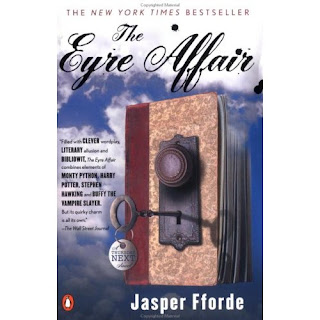 "A delightful first book…has the surrealism and satire of Douglas Adams, the nonsense and wordplay of Lewis Carroll, and the descriptive detail of Connie Willis. What sets Fforde's work apart, however, is its winsome heroine. This is a highly entertaining mystery with social satire, time travel, fantasy, science fiction, and romance thrown in to the well-written mix." Copyright 2002 Reed Business Information, Inc 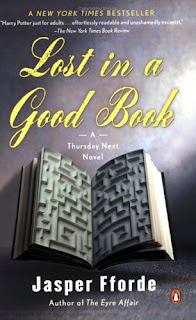 “Reading this novel is like being at a fabulous party of phenomenally funny and wickedly profound guests.” Copyright 2003 Reed Business Information, Inc.

“Beloved for his prodigious imagination, his satirical gifts, his literate humor, and sheer silliness, Jasper Fforde has delighted book lovers since Thursday Next first appeared in The Eyre Affair, a genre send-up hailed as an instant classic. Packed with word play, bizarre and entertaining subplots, and old-fashioned suspense, Thursday’s return[Thursday Next: First Among Sequels] is sure to be celebrated by Jasper’s fanatical fans and the critics who have loved him since the beginning.” –Amazon.com
If the first two prove as entertaining and popular as promised, look for the rest of the series to land on our shelves soon!
Posted by Library at 2:21 PM No comments:

Jonis Agee's The River Wife, set in 19th-century Missouri is a multigenerational, epic novel covering the lives of five women related either by marriage, partnership, or birth to French fur-trapper and river pirate, Jacques Ducharme. The novel mixes history with a bit of the supernatural to tell the story of the women who lived and toiled Jacques Landing. These women are everyday heroines-- battling life on the Mississippi, surviving by whatever means they can.

A reviewer on Amazon.com summarizes it this way:
“Agee's prose is cinematic. The overall experience is like watching an addictive miniseries. There is a lot happening, with many parallels between the different women. There is danger, violence, suspense, ghostly apparitions, treachery, pirate's treasure, intrigue, and murder--enough to keep almost anyone's interest piqued. But don't expect a fast-paced novel; this is a subtle, slow, lyrical, sensual, and heart-felt novel about what it means to make life-changing choices.” 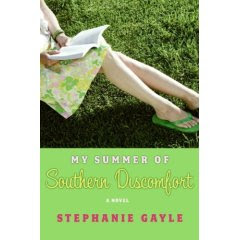 In her debut novel, Stephanie Gayle takes us through the transition of a young, liberal New York lawyer starting over in Georgia who finds herself appointed co counsel for a death-penalty case. While the criminal case successfully links the entire book together, it does not overshadow the lead character’s own personal trials.

“Despite some tough subject matter, Gayle has written a very appealing first novel with an engaging heroine and a cast of very believable secondary characters.”--Library Journal, starred review“Natalie's dilemmas are perfectly played, and Gayle's economical prose is peppered with sharp sentences and clever fish-out-of-water observations.”--Publishers Weekly 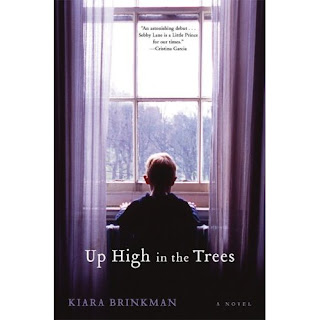 Up High in the Trees is a story told through the eyes of Sebby, an eight year old boy struggling to deal with the death of his pregnant mother. Although the young boy appears to be affected by Asperger's syndrome, the novel is not about autism, but about grief. Brinkman draws the reader so close to Sebby you begin to identify with him on a personal level.

“No one could blame you for turning away from Kiara Brinkman's haunting first novel. The muffled pain of Up High in the Trees will trigger your reflex for emotional protection but, if you can bear it, the treasures here are exquisite. I can't remember when I ever felt so torn between recoiling from a story and wishing I could somehow cross into its pages and comfort a character.” -Ron Charles - The Washington Post