Going on Now! Art Exhibit featuring Mary Cassatt. Next Week (March 1-5): Vincent Van Gogh, plus oodles of interesting facts that you may or may not have known! 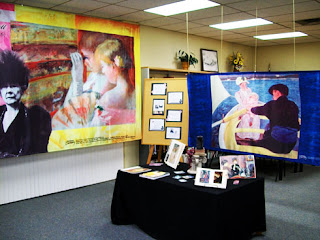 On the left, the woman in the big, black hat is Mary Cassatt.
The painting to her right is entitled "In The Box",circa 1879
Moving right along, the next painting is entitled "The Boating Party" circa 1893-94. 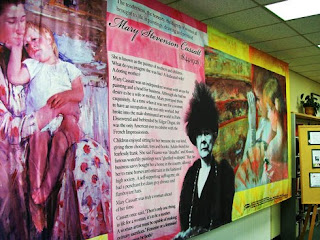 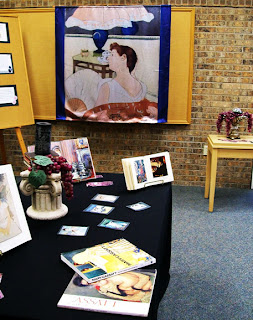 This painting is entitled "The Lamp", circa 1891.
It is hard to really take in these beautiful silk panels through anything but your own eyes.
We have all kinds of interesting facts about Cassatt. One being: Mary Cassatt is most famous for her paintings of mothers and their children. However, did you know that Mary Cassatt was neither a mother nor a wife? It's true.
Come and join us as Saturday will be the last day for Mary Cassatt. If you do miss this exhibit, don't fret, better yet, come and see some of the works of Vincent Van Gogh!
HOURS OF OPERATION: Mon., Wed., Thurs., and Fri.: 12-5:30
Tuesday: 9:00-12:00, 1:00-5:30
Saturday: 9:00-12:00
Posted by Library at 4:09 PM No comments: 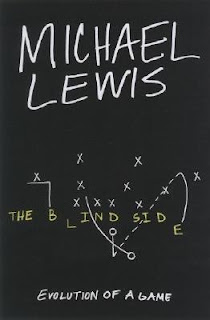 "In football, as in life, the value we place on people changes with the rules of the games they play."
The young man at the center of this extraordinary and moving story is likely one day to be among the most highly paid athletes in the National Football League. When we first meet him, he is one of thirteen children by a mother addicted to crack; he does not know his real name, his father, his birthday, or any of the things a child might learn in school-like, say, how to read or write. And he has no serious experience playing organized football.
What changes? He takes up football, and school, after a rich, Evangelical, Republican family plucks him from the mean streets. Their love is the first great force that alters the world's perception of the boy, whom they adopt. The second force is the evolution of professional football itself into a game in which the quarterback must be protected at any cost. Our protagonist turns out to be the priceless combination of size, speed, and agility necessary to guard the quarterback's greatest vulnerability: his blind side.

Posted by Library at 4:14 PM No comments: