You can open this book to any page and it will seem like that particular phrase was meant for you. Or perhaps you need a good laugh, or even a new joke to tell your buddies while your having that cup of morning coffee. Ifferisms is a poignant, yet hilarious book filled with quotes from the bible to Albert Einstein to Robin Williams. 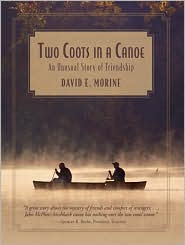 Have you ever heard the phrase 'you old coot'? Well.......These Two Coots in a Canoe tell a tale of true friendship. 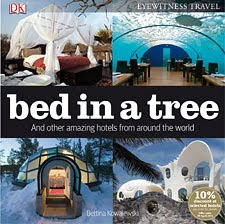 Have you ever slept in a dog's belly, or woken up to elephants scratching their backs on your room, or eaten a five-course meal underwater? Me either. A Bed in a Tree is filled with some of the most unusual hotels from around the world.
Also........
American Patriots Almanac, by William J. Bennett
Audubon Backyard Birdwatcher, by Robert Burton
Baby Book, by William Sears
Criminal Law Handbook, by Paul Bergman
Estate Planning Basics, by Denis Clifford
Guinness World Records 2010, by Craig Glenday
Hothouse Orchid, by Stuart Woods
Member of the Family, by Cesar Millan
Nolo's Encyclopedia of Everyday Law, by Shae Irving
On Grief and Grieving, by Elisabeth Kubler-Ross
The Only Grant Writing Book You Will Ever Need, by Ellen Karsh
Overcoming ADHD, by Stanley Greenspan
Room for Learning, by Tal Birdsey
Rowing the Atlantic, by Roz Savage
Swindoll's Book of Illustrations and Quotations, by Charles Swindoll
Time of My Life, by Patrick Swayze (audiobook-CDs)
True Compass, by Edward Kennedy
The Way of Boys, by Anthony Rao PH. D
What American Really Want....Really, by Frank Luntz
What to Expect: the toddler years, by Heidi Eisen Murkoff
What to Expect: the first year, by Heidi Eisen Murkoff
Why do they Act that Way, by David Allen Walsh
Your Child's Growing Mind, by James Healy
Posted by Library at 9:46 AM No comments: 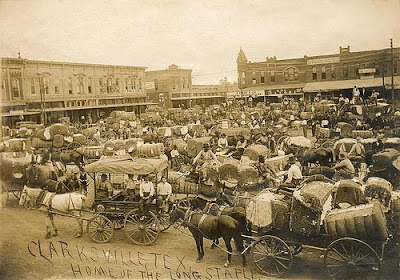 Downtown Clarksville Cotton Sale 1910
Red River County Public Library has partnered with Texas A&M University-Commerce to create an online collection of documents and objects of local historical interest.
The HeirLoom Project at Texas A&M University-Commerce James G. Gee Library is a grant-funded project that works with public libraries in NortheastTexas to assist them with digitization projects. These digitization projects will focus on preserving local history and creating connections in the community. In this, the second year of the project, the focus in on African American History.
An "HeirLoom" is "something valuable that has been in the possession of a family for a long time and has been passed on from one generation to the next". Public libraries are an important part of community life and are enjoyed by generations of citizens from that community. We believe public libraries are, in a sense, community heirlooms-valuable and sustained through time.
Our goal is to solicit family heirlooms from the community so that we may photograph or scan them and include them in the online collection to be preserved and enjoyed by many.
To see a sample of the pictures offered in the collection, visit our Flickr page.
To browse the content that we have uploaded so far, visit our Digital Collection.
Please contact us if you have any documents you would be willing to contribute. Your heirlooms need not leave your possession while they are being processed. You will take them with you the same day, if you desire. We would be happy to answer any questions.
This project is made possible by a grant from the U.S. Institute of Museum and Library Services to the Texas State Library and Archives Commission under the provisions of the Library Services and Technology Act.
Posted by Library at 1:08 PM No comments: