The most commonly sung song for English-speakers on New Year's eve, "Auld Lang Syne" is an old Scottish song that was first published by the poet Robert Burns in the 1796 edition of the book, Scots Musical Museum. Burns transcribed it (and made some refinements to the lyrics) after he heard it sung by an old man from the Ayrshire area of Scotland, Burns's homeland.

It is often remarked that "Auld Lang Syne" is one of the most popular songs that nobody knows the lyrics to. "Auld Lang Syne" literally translates as "old long since" and means "times gone by." The song asks whether old friends and times will be forgotten and promises to remember people of the past with fondness, "For auld lang syne, we'll tak a cup o' kindness yet."

The lesser known verses continue this theme, lamenting how friends who once used to "run about the braes,/ And pou'd the gowans fine" (run about the hills and pulled up the daisies) and "paidl'd in the burn/Frae morning sun till dine" (paddled in the stream from morning to dusk) have become divided by time and distance—"seas between us braid hae roar'd" (broad seas have roared between us). Yet there is always time for old friends to get together—if not in person then in memory—and "tak a right guid-willie waught" (a good-will drink).

But it was bandleader Guy Lombardo, and not Robert Burns, who popularized the song and turned it into a New Year's tradition. Lombardo first heard "Auld Lang Syne" in his hometown of London, Ontario, where it was sung by Scottish immigrants. When he and his brothers formed the famous dance band, Guy Lombardo and His Royal Canadians, the song became one of their standards. Lombardo played the song at midnight at a New Year's eve party at the Roosevelt Hotel in New York City in 1929, and a tradition was born. After that, Lombardo's version of the song was played every New Year's eve from the 1930s until 1976 at the Waldorf Astoria. In the first years it was broadcast on radio, and then on television. The song became such a New Year's tradition that "Life magazine wrote that if Lombardo failed to play 'Auld Lang Syne,' the American public would not believe that the new year had really arrived."

To read more, click here for the complete article.
Posted by Library at 2:11 PM No comments: 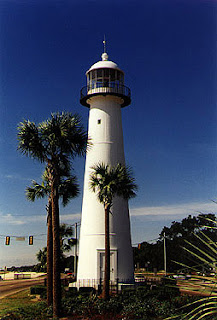 Biloxi Light
Biloxi, Mississippi
*
On the web:
Lighthouses: A Photographic Journey
to read about lighthouses all over the world.
*
In the library:
*
Lighthouses: A Pictorial History of Lighthouses Around the World
by Leo Marriott
*
Sentinel of the Seas: Life and Death
at the Most Dangerous Lighthouse Ever Built
by Dennis M. Powers
Chronicles the building of the St. George Reef Lighthouse
in northern California.
Posted by Library at 11:21 AM No comments: